Question: M9. Medieval Cities In The West And East THE EXCHANGE OF GOODS BETWEEN SOCIETIES Was A Feature Of Both The Ancient And Medieval Worlds. Trade Routes Crisscrossed The Lands Of The Medieval World, And With Increased Trade Came The Growth Of Cities. In Europe, Towns Had Dwindled After The Collapse Of The Western Roman Empire, But With The Revival Of Trade …

M9. Medieval Cities in the West and East

THE EXCHANGE OF GOODS BETWEEN SOCIETIES was a feature of boththe ancient and medieval worlds. Trade routes crisscrossed thelands of the medieval world, and with increased trade came thegrowth of cities. In Europe, towns had dwindled after the collapseof the Western Roman Empire, but with the revival of trade in theeleventh and twelfth centuries, the cities came back to life. Thisrevival occurred first in the old Roman cities, but soon new citiesarose as merchants and artisans sought additional centers for theiractivities. As cities grew, so did the number of fortified houses,town halls, and churches whose towers punctuated the urban Europeanskyline. Nevertheless, in the Middle Ages, cities in westernEurope, especially north of the Alps, remained relatively small.Even the larger cities of Italy, such as Florence and Venice, withpopulations of 100,000, seemed insignificant in comparison withConstantinople and the great cities of the Middle East andChina.

With a population of possibly 300,000 people, Constantinople,the capital city of the Byzantine Empire, was the largest city inEurope in the High Middle Ages, and until the twelfth century, itwas Europe’s greatest commercial center, an important crossroadsfor the exchange of goods between West and East. In addition topalaces, cathedrals, and monastic buildings, Constantinople alsohad numerous gardens and orchards that occupied large areas insideits fortified walls. Despite the extensive open and cultivatedspaces, the city was not self-sufficient and relied on imports offood under close government direction.

As trade flourished in the Islamic world, cities prospered. Whenthe Abbasids were in power, Baghdad, with a population close to700,000, was probably the largest city in the empire and one of thegreatest cities in the world. Islamic cities had a distinctivephysical appearance. Usually, the most impressive urban buildingswere the palaces for the caliphs or the local governors and thegreat mosques for worship. There were also public buildings withfountains and secluded courtyards, public baths, and bazaars. Thebazaar, a covered market, was a crucial part of every Muslimsettlement and an important trading center where goods from all theknown world were available. Food prepared for sale at the marketwas carefully supervised. A rule in one Muslim city stated thatgrilled meats should only be made with fresh meat and not with meatthat came from a sick animal and purchased for its cheapness. Themerchants were among the greatest beneficiaries of the growth ofcities in the Islamic world.

During the medieval period, cities in China were the largest inthe world. The southern port of Hangzhou had at least a millionresidents by 1000, and a number of other cities, including Chang’anand Kaifeng, may also have reached that size. Chinese cities wereknown for their broad canals and wide, tree-lined streets. Theywere no longer administrative centers dominated by officials andtheir families but now included a broader mix of officials,merchants, artisans, and entertainers. The prosperity of Chinesecities was well known. Marco Polo, in describing Hangzhou tounbelieving Europeans in the late thirteenth century, reported thatso many pleasures can be found that one “fancies himself to be inParadise.” 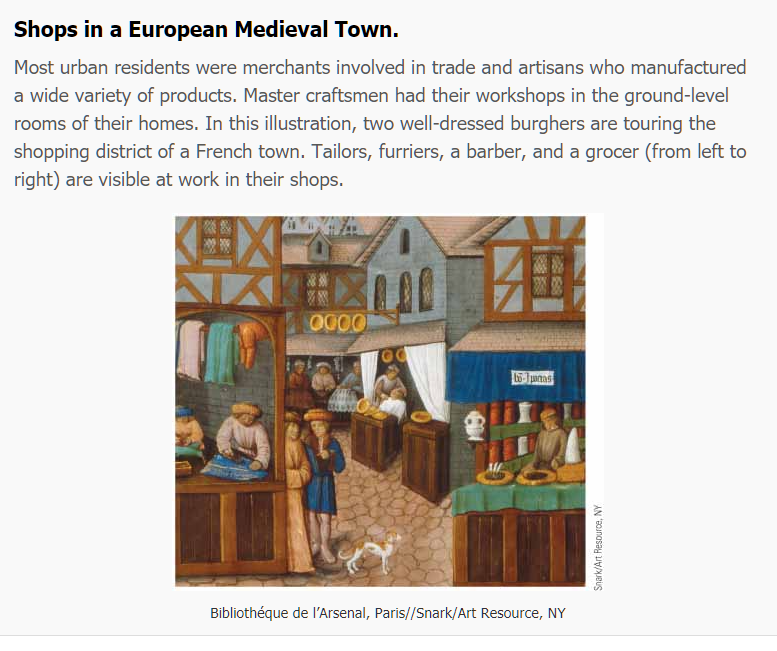 Q. Based on a comparison of these medieval cities, which ofthese civilizations do you think was the most advanced? Why?